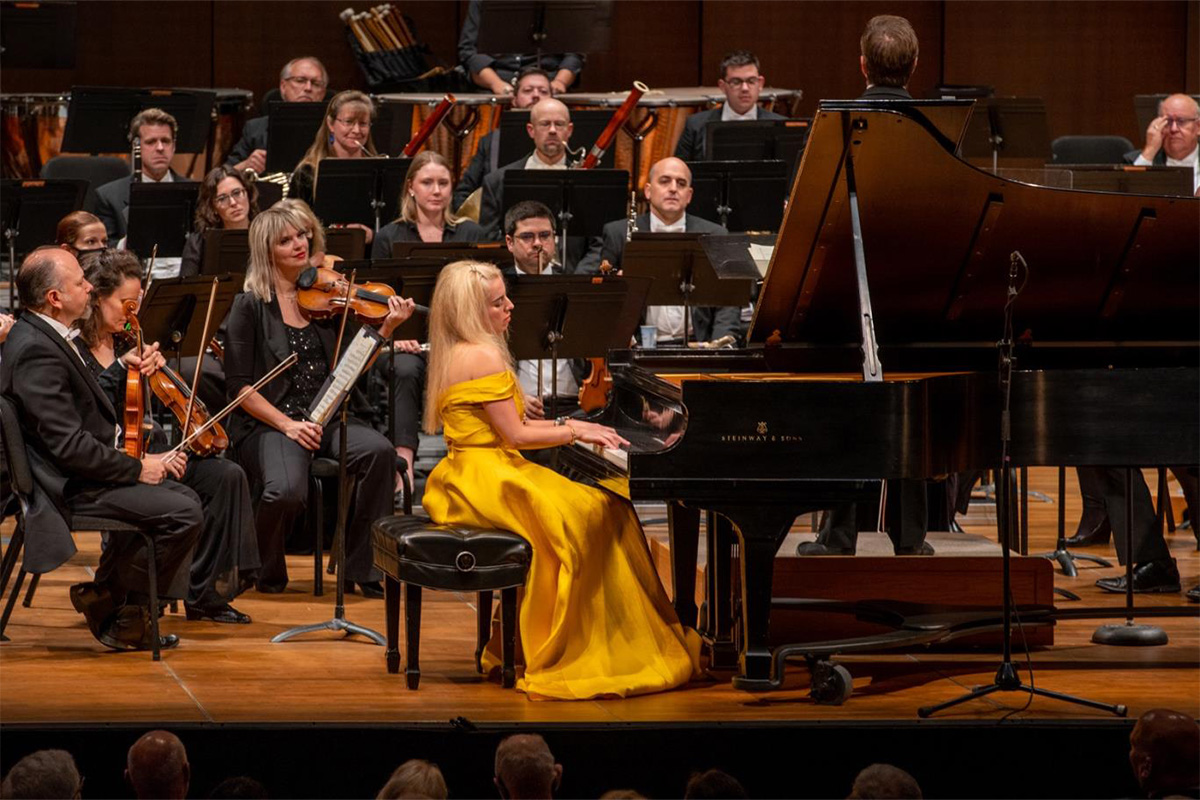 By Larry Lapidus
The Spokesman-Review
September 18, 2022

To launch the 77th season of the Spokane Symphony in a spirit of optimism and commitment to the power of human creativity, Music Director James Lowe chose three works that embody those qualities: The Piano Concerto No. 5 in E flat major Op. 73 “Emperor” (1809) of Ludwig van Beethoven, Starburst (2012) by Jessie Montgomery, and Symphonie Fantastique (1829) of Hector Berlioz.

Even though the Beethoven and Berlioz works are among the most widely known and celebrated in the symphonic repertoire, Saturday’s performances showed that, with skill, imagination and passionate creativity, they can have as great an impact on an audience and appear in every way as fresh and daring as if the ink on the manuscripts had just dried.

Only four months after astounding her audience at the Northwest Bachfest with an incomparable performance of Prokofiev’s Sixth Piano Sonata, American pianist Natasha Paremski seated herself before the gorgeous Steinway grand on the stage of the Martin Woldson Theater at the Fox to begin the Emperor Concerto of Beethoven – a very different piece of music. In fact, those fortunate enough to have heard Paremski’s rendition of the Prokofiev wondered how comfortable such a teeming imagination – and such a volcanic technique – would be within the classical confines of Beethoven’s heroic masterpiece.

The answer is very comfortable indeed.

Even though Beethoven wrote out every note of the piano part, even the cadenzas, which were ordinarily improvised by the soloist, Paremski was able to place her individual stamp from the first entry. Two attributes enabled her to do that. First, she possesses technical resources greater than those of most professional pianists. There seems to be no limit to the speed and fluidity of her scales and octaves, the strength and independence of her hands and fingers or, most importantly, her ability to draw the widest possible dynamic range from the instrument, and to do so almost faster than the listener’s mind can perceive. Second, she is hypersensitive to the emotional effects that can be achieved by a brief pause, a sudden change of color, and she employs this gift to draw meanings out of Beethoven’s writing that are new and startling even to those who have heard it hundreds of times and fear it may have no more to offer.

As her partners in this, the most tightly integrated and symphonic of Beethoven’s piano concertos, James Lowe and the Spokane Symphony imparted a distinct character to their interpretation which perfectly matched Paremski’s view of the work as a statement of defiant heroism. This view places the work more in line with the Third and Fifth Symphonies of

Beethoven, as distinct from the Olympian, magisterial confidence of the Seventh Symphony. By employing brisk tempos, strong accents and the sharply etched instrumental clarity we have come to expect from him, Lowe helped to deliver a vision of the “Emperor” Concerto that has nothing to do with emperors and everything to do with the potential of the individual human spirit. This, by the way, is the reason we still value the music of Beethoven.

After a brief intermission, this intense energy was renewed by a performance of Starburst, a highly imaginative and skillfully crafted work for string orchestra by Jessie Montgomery. The various string sections of the orchestra tossed Montgomery’s piquant, potent ideas back and forth with ease and precision, while maintaining perfect ensemble within each section. Such accomplishment after only a few hours of rehearsing a new piece spoke not only of the players’ skill, but also of their commitment to the work and their audience.

Before beginning the work, Lowe spoke to the audience, explaining that the performance was dedicated to Sandy Williams, the Spokane publisher and community activist who was killed in a plane crash on Sept. 6. Montgomery maintains a strong bond between her work as a composer and her commitment to furthering social and economic equity, which made the dedication particularly meaningful.

Following his announcement of the dedication, Lowe handed the microphone to Rick Williams, Sandy’s brother, who spoke of the need to continue her work, and encouraged everyone within earshot to learn more about the Carl Maxey Center, which his sister helped to create, and to support it to the extent of their ability. Collection boxes had been placed throughout the Fox to demonstrate that Beethoven’s message of the brotherhood of all humanity does not lose its relevance as soon as one leaves the confines of the theater.

It must be admitted that the moral underpinnings of Berlioz’s Symphonie Fantastique are not as admirable as those of the works we heard earlier in the program. A musical narration of the tale of a self-absorbed, lovesick fop, who seeks release from his heartache through narcotics, would hardly seem likely to brighten one’s view of human potential … unless it were composed by one of the greatest geniuses in the history of European art. Had Berlioz not published a Treatise on Instrumentation, those who followed him could have used the score of his Symphonie for that purpose. There is scarcely a bar in it that does not contain an unprecedented example of instruments used in a manner or a combination that is startling, suggestive or beautiful.

Neither is there one of these instances that has escaped the notice of Lowe, who coached the members of his orchestra to render every one to perfection. Whether sultry, strident or fierce, every feature of Berlioz’s vast tapestry was laid open to us through the conductor’s faultless sense of balance, culminating in the fugal sections of the final movement, The Witches’ Sabbath, which were rendered with a clarity that at least one jaded member of the audience had never heard before.

To experience playing of such virtuosity coming from an orchestra just emerging from a long hiatus was perhaps the greatest inspiration of the evening.