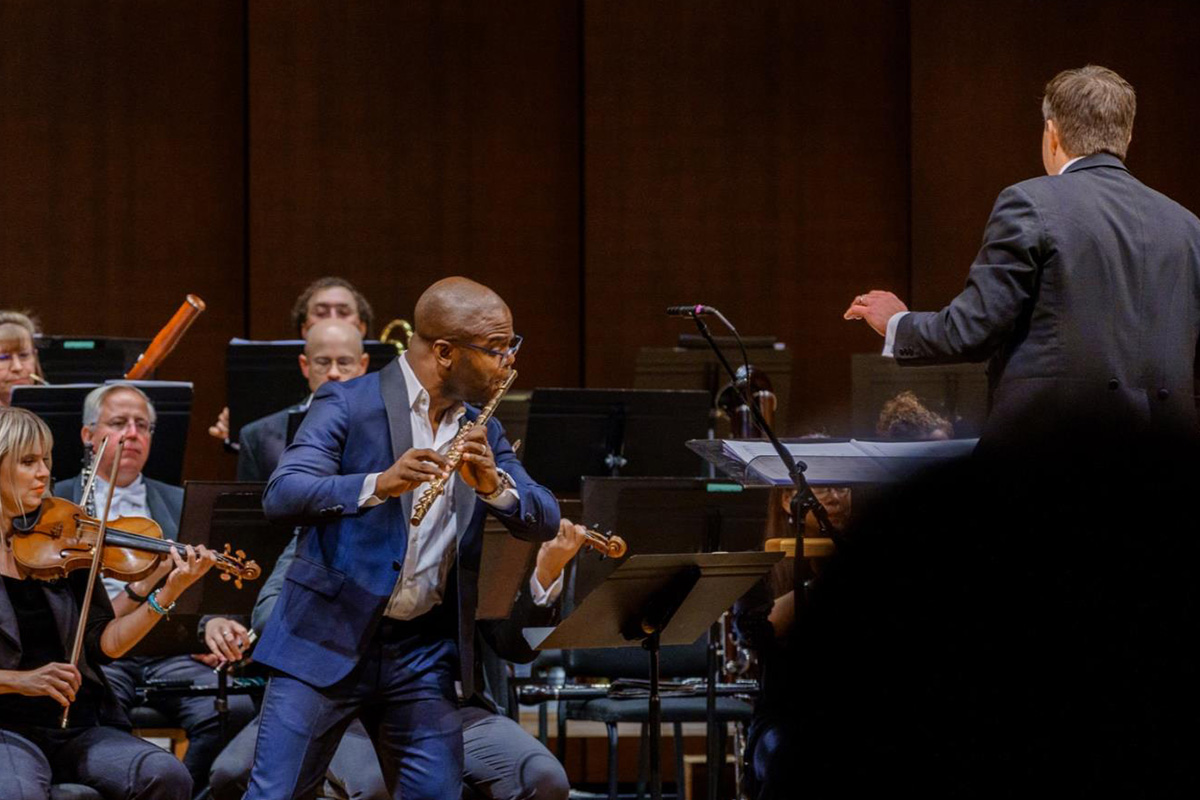 By Larry Lapidus
The Spokesman-Review
Oct. 9, 2022

For the second concert in the Masterworks Series of the Spokane Symphony, music director and principal conductor James Lowe selected works that some people might choose to dislike, even without hearing them.

Even avowed lovers of classical music have their prejudices, which might have kept them from experiencing the joy that brought Saturday night’s audience at the Martin Woldson Theater at the Fox repeatedly to its feet after performances of “Masquerade” (2013) by Anna Clyne, the Flute Concerto (1926) of Carl Nielsen, and the Second Symphony (1908) of Sergei Rachmaninov.

The prejudice that some feel against contemporary concert music is, of course, a species of fear of the unknown, an anxiety about being proved inadequate or incapable of dealing with a new challenge. The determined and creative efforts of Lowe and his predecessor, Eckart Preu, have done a great deal to free Spokane audiences of this burden by including newly composed works in virtually every program, among which have been two other pieces by Clyne: the brooding tone poem “Night Ferry” (2012) and “Dance” (2019), the cello concerto that was brilliantly performed last year by the symphony and cellist Inbal Segev.

Clyne composed “Masquerade” for the last night of the Proms of London, a massive music festival famous for its informal ambiance and wildly eclectic audiences. In this brief work, Clyne evokes the hectic and sometimes lurid promenade festivals held in London during the 18th century, in which actors reciting Shakespeare vied with jugglers, fire-eaters and puppeteers to entertain masked revelers drawn from every level of English society.

Clyne catches up her audience in a dizzying swirl of activity in which every section of the orchestra calls for their attention in a joyous cacophony of cascading scales and snatches of melody, all meticulously planned to sound spontaneous. Such music demands both precision and flexibility from the orchestra, which is just what it delivered.

The prejudice against the music of Danish composer Carl Nielsen arose from the fact that he showed very poor judgment by being neither Jean Sibelius nor Edvard Grieg, two Scandinavians whose works have always been welcome in concert halls, thanks to their bountiful gifts of melody and seriousness of purpose, both of which Nielsen manifestly lacked. What his music offers instead is an inexhaustible flow of ideas – clever, lyrical, troubling – that is reliably stimulating, thought-provoking and, as in his Flute Concerto, delightful.

Whatever quibble one may have had with the frail structure of Nielsen’s concerto was effectively dismissed by the brilliance of its performance by the Spokane Symphony and its soloist for these concerts, Demarre McGill, whose mastery of the flute sets a new benchmark for that instrument. McGill’s technique allows him to achieve expressive ends ordinarily reserved for players of stringed instruments.

His playing offers the poignant lyricism and mysterious beauty that one expects of a flutist of the first rank.

McGill’s musicianship guides him to apply this exceptional gift in a way that brings the greatest degree of liveliness, humor and pathos to every phrase of Nielsen’s quicksilver changes in thought and mood.

It may come as a surprise to those with shorter memories that there might be a prejudice affecting the performance of works by Rachmaninov. Between 1950 and 1980, they were disdained by musicians and audiences alike as irrelevant potboilers created by an artist who clung to an earlier era of Russian musical culture – that of Tchaikovsky and Rimsky-Korsakov – rather than keeping step into the modern era in which Stravinsky, Schoenberg and Bartok exposed the manifold flaws of Romanticism.

What was heard by audiences this weekend in Spokane, however, was the expression of an open and generous spirit whose love of life and nostalgia at its impermanence knows no era and is immune to changes in fashion. The Symphony No 2. in E minor, Op. 27 is as rich in ideas and invention as anything Nielsen ever conceived. Melody is provided not in fragments, but in seemingly unending streams, extending beyond the length of anything thought of by earlier composers.

Each new gorgeous tune is announced by a solo instrument before being taken up lovingly by the orchestra as a whole. This gave us a chance to wonder yet again at the playing of many of the orchestra’s principal players: Charles Karshney (horn), Keith Thomas (oboe), Sheila McNally-Armstrong (English horn), Lynn Feller-Marshall (bassoon), and Erica Uzcategui (concertmaster for these concerts). Especially remarkable was the heart-melting rendition by principal clarinet Chip Phillips of the enthralling passage at the opening of the second movement, in which the composer surpasses himself in the creation of “endless melody".